When I first began looking into minimalism, I was desperate for a change in my household. I had two small children, toys were everywhere, and I felt like all I did was keep everyone’s mouths fed and the house somewhat presentable.

I was totally exhausted. We didn’t have a large home and in my mind that was part of the problem. I thought we needed more space. 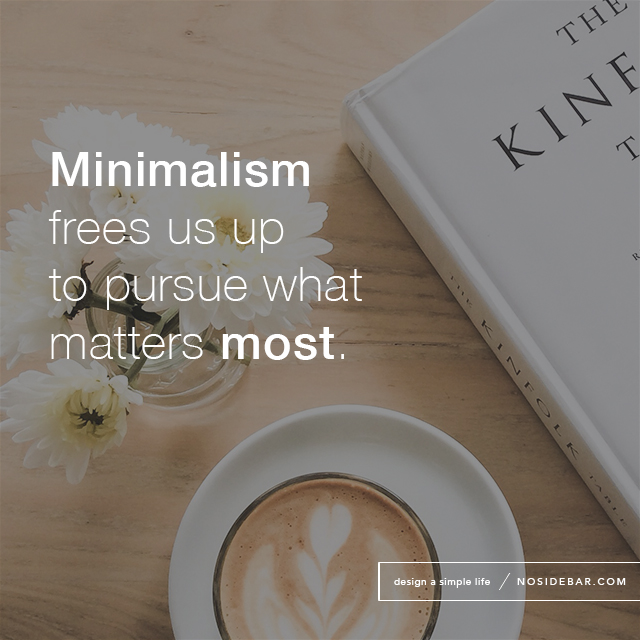 I would see quotes about leaving the house a mess for quality time with your children and felt guilty. While I left countless messes to read about Brer Rabbit for thousandth time, I still had a mess afterwards instead of some downtime for me, time with my husband or time to pursue the passions in my heart.

As I began reading articles about minimalism, I was reluctant and nervous. The words I was reading didn’t come across as extreme or strict. Their laid-back, caring tone made me want to chat with them over a cup of coffee.

Some of them were in a similar place as I was — a young family wanting a little more ease in the home life, wanting to focus on relationships. As I began my journey and our purge of excess, I quickly learned some things about minimalism that initially, one might not pick up. Here are five of those.

1. Minimalism can be for everyone.

First of all, your income does not matter. At first glance, minimalism, with such a tendency towards stark, sleek lines, can seem more high end, like brick walls and modern fixtures in a Soho loft and traveling to exotic locations.

However, minimalism goes much deeper. It is NOT just for those in a higher income bracket, but is truly beneficial for everyone. After getting married, my husband and I both worked for a non profit and were in a lower income group.

So, trust me when I say, minimalism is not just for those who can afford all the stuff. It’s for those of us who have lots of stuff, excess, but still have those times when we’re not sure how we’re going to get groceries the next week.

Secondly, minimalism is not just for a particular personality type. I’ve heard responses like, “I’m too messy” or “I just don’t like to be organized.” Minimalism isn’t about either of those.

Yes, most minimalist homes are tidy. But its not because the owners are slaving away all day cleaning — quite the opposite. Because of the reduced possessions, maintaining and decluttering your home is quicker and easier. It gives those with a carefree spirit more time and freedom to follow their whims.

Minimalism is for the stay-at-home mom, the working mom, the retiree, the college student, the CEO or the guy working a factory line. It is for anyone, regardless of income or circumstances, who is ready to focus on deeper relationships and pursue dreams and enjoy a more meaningful lifestyle.

2. Minimalism frees us up to pursue what matters most.

This wasn’t on my radar when I began. I just wanted to be free from the stuff that was taking over my life and home. If someone had asked me, I would have quickly seen, I was overwhelmed because I couldn’t spend my time according to my values.

I don’t value a clean home over quality time with my kids, but because of the amount of things we owned, I was spending more time managing stuff than I wanted.

After ridding ourselves of the excess, we have more space and time and energy to try some creative outlets, follow a dream we’ve had for years, or maybe finally make some really significant life changes.

3. Minimalism looks different for everyone.

I’ve heard of some living with only one hundred possessions, while others will have much more. Some people will travel the world and others will stay put.

Some will sell their home for a tiny house and others will stay in the home they’ve always been in. Some will quit their day job to pursue a dream and others will continue to be doctors, teachers, etc.

There is no magic number of how many items you can have or how small your home needs to be.

When you decide to start purging your possessions you will also start to curb your consumption. You see what all you do have and appreciate it — and not just your material possessions, but your family, basic necessities, friends, education.

When we live with so much excess, we often forget to be thankful for simple clicks of a light switch or clean running water throughout our home.

The mindfulness that comes from letting go of things, runs deep and gratitude overflows to not just make us a more joyful person. We begin to ask and look for ways we can help others rather than focusing on ourselves and our wants.

5. Minimalism affects all areas of our lives.

Many begin reducing possessions in their home so they have less to manage. For me, I immediately noticed there was a spiritual side to simplifying as well. My soul could breathe a little easier. This led to reducing commitments

At the time I had a direct sales business and I quickly saw that decluttering and simplifying how I operated, would not only make me more successful, but also make work a little easier. Only recently have I begun to also see where digital clutter is causing stress and distraction.

Though I’ve shared five important things I’ve learned about minimalism, I could go on. While I might have hesitated about jumping in at the start, now I look back and am so thankful for this journey.

For me and my family, there is no going back. The intentionality and meaningfulness we found beneath our stuff has simply been life-changing.