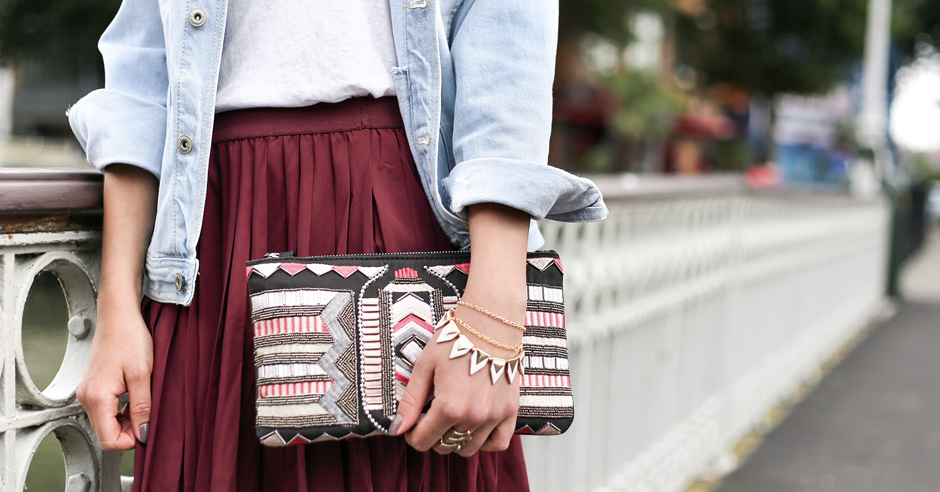 There was a time in my life when I owned flip flops in every color of the rainbow and then some. Every single pair was approximately $2.50, purchased from Old Navy, and I had to replace at least two or three pairs every single year.

On a similar vein, I had the same t-shirt from Target in eight different colors and, like the flip flops, at least one or two of those shirts wore out every year—some after just a few months.

I was caught in a cycle of consumerism, buying cheap items to fill a perceived need for variety in my wardrobe, never stopping to think about why that was the case, and what or who my excess of cheap clothing items was costing.

About a year into my simple living journey, I stumbled upon an article arguing for the intentional purchase of expensive clothing. The author suggested placing a minimum dollar amount on any item of clothing you might buy and only allowing yourself to purchase clothing above this dollar threshold.

While I can’t say I’ve ever done that, this article did get me thinking about the cost of clothing and its relation to quality. I started googling and fell down the rabbit hole, learning all kinds of things about the fashion industry, fast fashion, the environmental impact, and the human impact as well. More than numbers and facts were staring me in the face—there were real people behind those numbers and facts as well—and it caused a major shift in my buying philosophy.

I had long since discarded my excessive collection of colorful flip flops and reduced my t-shirts to a smaller number as well, but this was a different kind of mental shift. It wasn’t just about clearing space, it was about recognizing the impact I had—positive or negative—based on what I was buying.

What Is Ethical Fashion?

If you’ve been around the simple living or minimalism scene for a while, you’ve probably heard the term “ethical fashion” thrown around. You may also have heard the terms slow fashion, fair trade fashion, and sustainable fashion as well. So, what exactly do all of those terms mean?

Though similar in principal, each one is unique, but all are an alternative to another phrase you might’ve heard—fast fashion.

Fast fashion is just what it sounds like. Rather than sticking to the historical model of a few seasons per year where it took months (sometimes years) for items to go from design to reality and from the catwalk to a local department store, the fashion industry now expedites the process to get more clothing in the hands of consumers faster. It results in close to 52 fashion “seasons” per year, with new items coming in all the time.

In order to meet such high demand, something must be sacrificed. Unfortunately, that sacrifice is often related to the quality of the garment, its affect on the environment, and the human lives involved in the production process.

Countless fast fashion retailers take advantage of cheap labor overseas, manufacturing their garments in sweatshops with little to no regard for the working conditions of the laborers and the negative impacts chemicals and other elements have on those workers and the environment.

Ethical, slow, sustainable, and fair trade fashion are all reactions against the fast fashion industry.

Fair Trade fashion is perhaps the most narrow of the terms. It focuses specifically on the working conditions of the laborers and in order for an item of clothing to be considered Fair Trade, it must be certified by Fair Trade USA.

Slow fashion is the direct opposite of fast fashion, focusing on creating garments with quality and longevity in mind. Though slow fashion is not by default sustainable, ethical, or Fair Trade, many slow fashion brands create with these principals in mind. By creating garments with quality and longevity in mind, it reduces the strain on workers, as they aren’t pressured to meet the insane deadlines and demands perpetuated by the fast fashion industry, and it reduces the strain on the environment, as the higher quality items last longer, which means they don’t need to be replaced as frequently as items of a lower quality.

Why Does Ethical Fashion Matter?

If I’m being honest, there are so many different elements of the ethical and slow fashion movement that we could discuss, but for many of us who have grown up in a world of fast fashion—however unaware we may have been of that fact—the question we must first address is why ethical fashion matters in the first place.

What’s the big deal with owning flip flops in every color of the rainbow, buying shirts for $5 and tossing them just a few months later, and having the enormous variety fast fashion gives us?

The big deal is this: it costs more than you think.

As members of a capitalist culture, Americans primarily consider cost in terms of dollars and cents. We think about how it will impact our wallet and budget, but rarely anything else. But the true cost of anything is not measured in terms of the number on a price tag. There are hidden costs associated with every purchase, and the cost of fast fashion is a lot higher than we realize.

Buying into a fast fashion mindset costs you time.

They same time is money, so have you ever stopped to consider how much time you spend shopping each year?

You might be someone who shops for hobby or almost for sport, but for most of us, it’s kind of a pain in the neck to have to go shopping for a black shirt again, even though you bought one just a few months ago. Even if you’re able to walk in and out of the store in 15 minutes, that’s still 15 minutes of time (plus your commute) that could’ve been spent elsewhere. It doesn’t seem like a lot, but it certainly adds up.

Add to that the amount of time you spend caring for all that clothing (laundry, anyone?) and stressing over what to wear, fast fashion probably steals way more hours from your life than you ever realized.

Buying into a fast fashion mindset costs the environment.

On top of the enormous amount of textile waste sitting in landfills, the actual production of clothing negatively impacts the environment as well. It takes 2700 liters of water to make one cotton t-shirt, which is roughly the same amount of water one person will drink over a 12 year period. Pesticides used in farming seep into the ground, eventually making it infertile, and chemical dye runoff pollutes local water sources.

Though synthetic fibers like polyester have a smaller impact on things like water scarcity, the limited options for textile recycling and its inability to biodegrade only contributes to the amount of waste sitting in landfills year after year.

Buying into a fast fashion mindset costs other people.

Though thinking about the cost in time and learning about environmental impact of the fast fashion industry was eye opening, it was learning about its negative impact on human lives that made the biggest difference for me.

Do you remember the tragic collapse of the garment factory in Dhaka, Bangladesh in 2013? Known as the Rana Plaza collapse, it cost the lives of over 1100 garment workers and injured an estimated 2500 people. Despite other businesses in the building being closed after discovering cracks in the building, the garment workers were ordered to return the following day, with threats that their pay would be withheld if they didn’t come in.

We’d like to think events like this are a rarity, but they shine on a light on the horrible and often deadly conditions millions of garment workers deal with every day. In addition to working in terrible and unsafe conditions, many garment workers are children, trafficking victims, or both.

It hurts to think about, but the t-shirt or dress you got from the nearest fast fashion retailer was quite possibly made by a child or trafficked laborer in unsafe or even deadly conditions for pennies a day, if that. And they continue to live in these situations because of fast fashion and the insatiable consumerist demand for t-shirts for $8.

Though we like to think of fashion as an individual thing, we don’t live in an isolated society. The things we purchase and wear impact more than just what we look like from day to day and how much money we have in our bank account.

Ethical fashion matters because our lives aren’t the only ones that matter. The lives of garment workers around the globe matter, as does the sustainability of the planet we all live on.

So next time you go to purchase a pair of jeans or a dress for that upcoming event, ask yourself: is it really worth the cost? The whole cost?

*Note – This article was originally published on Simplify by Sarah.