They said it would be big. Prepare, they said. Stock up on groceries, batteries, blankets, and gas. There could be power outages and flooding. I listened to the news and just shook my head. I thought I knew how these storms went. 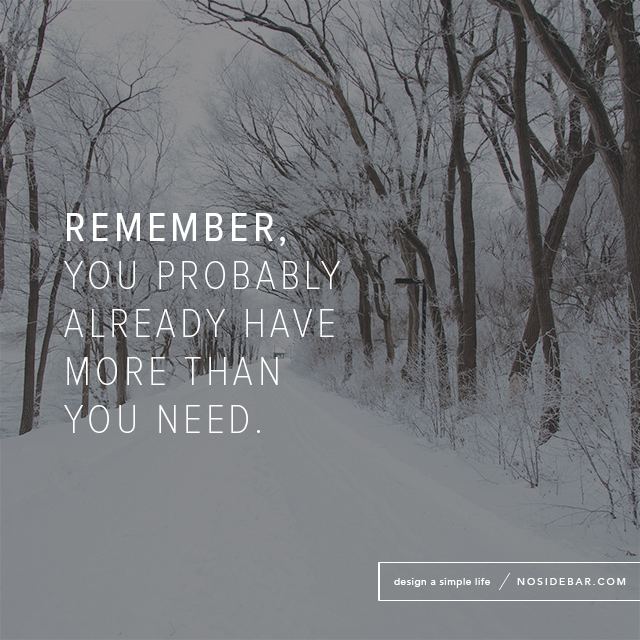 Being from the West, a snow storm is no big deal. I often laugh at the East Coast frenzy for any form of precipitation. They swarm to the grocery stores buying bread and gallons of milk only to wake up to a few inches of snow.

Well, this time I was wrong — 30 inches later, schools closed for days, and the Federal Government and Metro shut down. This storm was no joke.

It was amazing to watch and witness and will forever be remembered as the Blizzard of 2016. Our boys loved the snow days, sledding at the school, and making snow forts. But for me, this had been more.

This storm opened my eyes up to so much more than waist-high snow plows and cars stuck in ditches. This storm showed me what is truly important and what it means to live with intention.

The Desire for More

Here are 5 things I learned about life during the Blizzard of 2016:

1. We have more than enough.

When everyone was running to the grocery store to stock up on milk, eggs, and batteries, I was shaking my head. After 30 inches of snow, I am kicking myself for not taking the warnings more seriously.

I did go to the store the day before the storm. But I didn’t “stock” up. I just bought what I would normally buy for a weeks worth of groceries. You know what happened? Nothing.

After being snowed-in for four days, we still had food. We still had milk, cereal, eggs, and two bananas. We were low on fresh fruit and cheese but we survived. We also dug food out of the freezer and cooked it up.

While we were at it, we went through the pantry and the refrigerator too. Some stuff we threw out, and other stuff we found a place for. We probably could have gone another three days without going to the grocery store. Amazing how much you realize you have, when you really can’t go out to get more.

2. The desire to shop is fierce.

The snow plow had not been down our street and our cars were stuck in front of snow piles four feet deep. We were able to make a walkway from the front door to the street so that we could go on a walk and the dog could get out.

We were going on day five and I was itching to go to the store. I told my husband I was going to walk to the store and he asked me what I needed so badly. I really didn’t have a good answer.

I just knew I needed to get out, so he told me to go on a walk. I took the boys sledding and we had so much fun. I didn’t need to go to the store but that desire to go out and “buy” something was so fierce.

Being stuck made me stop and really think about my intentions and re-evaluate how badly I needed to go to the store. What was it I was really searching for? Why couldn’t I just sit with myself?

We were literally inside for days. I had been looking at piles of stuff and I want to get rid of all of it. Unfortunately, at the time, there was no where to put it.

As soon as the roads cleared I filled my van up with the stuff that had been staring at me that week. And I didn’t stop there — I have since donated about three more van loads. It felt great.

4. You realize your true tribe.

We didn’t really hear from many friends checking to see if we needed anything or if we had power. Truth be told, I haven’t checked in on them either. But it was amazing to see who comes together in times of crisis.

Surprisingly, our neighbors all united during the store. We helped each other dig cars our, borrowed shovels and snow plows, and invited each other over to watch football. I even had someone bring me a half gallon of milk after I said we were getting low.

Community, in times of need, is so important and it sometimes shows up in the least expected places.

I have to admit I liked the fact we couldn’t go anywhere. It makes you slow down and assess what you really need. If I needed something from the store, I would have had to walk. Which meant putting on my heavy snow gear and boots, taking a child with me, or finding someone to watch them.

I would then have had to walk a mile in knee deep snow or on slushy roads. How badly did I need to go to the store? Not that bad. It made me slow down and think of fun things I could have done with my boys. We pulled out old puzzles, old Lego sets, and old blocks. We didn’t need to buy anything after all.

In the end, we had everything we needed right there. We had a roof over our heads and we had each other. There isn’t anything more necessary than that.