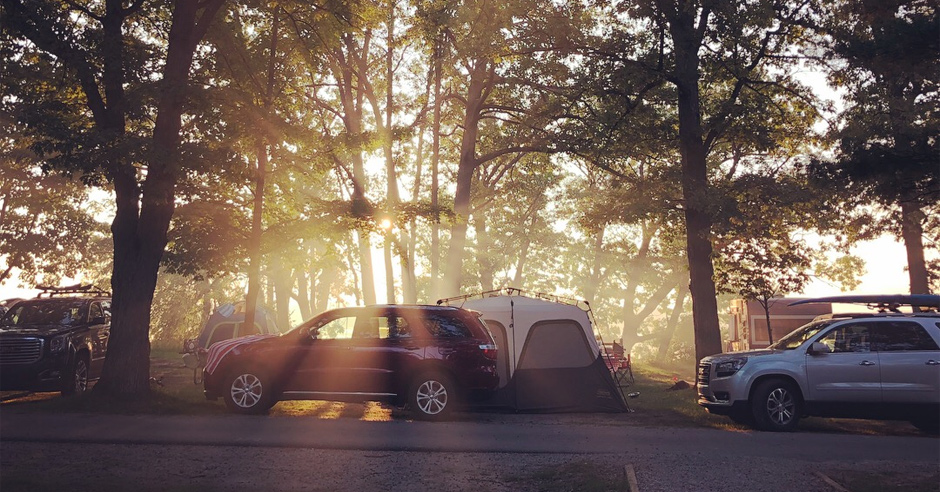 “We better jog it out,” I said to my wife Heather.

She glanced up at me, strapped on her pack, and without a word headed down the trail at a good clip as the rain began to intensify.

We were in the middle of a getaway weekend, and in the midst of hiking through Pictured Rocks National Lakeshore, on our way to the City of Marquette in Michigan’s beautiful Upper Peninsula. It was my idea to stop in Pictured Rocks, one of my favorite places to hike, since it’s on the way (more or less) as you drive west through the peninsula from the Mackinac Bridge.

Heather was up for hiking, as she always is, but there were a few details that I probably should have thought through a bit better.

For one, we only had about two hours to spare and seven miles to hike over mildly rugged terrain, which wasn’t going to leave us much time to linger at the points of interest along the way, including majestic waterfalls and iron ore-stained cliff formations.

Two, I forgot to take into account that there are not many easy dining options for long stretches in the Upper Peninsula, so we were forced to skip lunch in order to get the hike in. Heather is not a big fan of skipping lunch (ever see those Snickers commercials?).

Finally, I didn’t look real closely at the weather—if I had I would have noticed that a storm was scheduled to roll in precisely at the time we were to reach the 3.5 mile turnaround point on our “out and back” hike. Hence, the need to “jog it out.”

When we reached our car—cold and soaked from head to toe—I tried to put a “look on the bright side of things” spin on the situation. Again, a glance but no response as Heather wiped mud off…well…pretty much everything.

After a 45-minute drive to Marquette, with an Avett Brothers album playing, and gorgeous Lake Superior views all around us, we headed straight to Black Rocks Brewery for some well-deserved craft beers. Still soaked, we had a good laugh about the whole situation, and our conversation shifted from what went wrong to what went right, including the opportunity to take in some of the most amazing natural landscapes you’ll see anywhere in the United States.

After what turned out to be a great weekend, I ran into some of our good friends in our hometown of Traverse City who asked about our time away. I recounted our hiking adventure, and summed it up by saying, “I’m sure we’ll look back at it fondly.” With a laugh, one of our friends said, “You’ve been saying that a lot lately!”

This is true. With summer drawing to a close, Heather and I felt the urgency to pack in as much as we could outside, and so planned a number of outings with other families—from camping, to river floats on innertubes, to beach dinners in the Sleeping Bear Dunes National Lakeshore—that seemed like great ideas, but in reality all involved challenges, especially with loads of kids under eight years old in tow. During each experience, such as the beach dinner on an evening with forty mile per hour wind gusts, I tried to put a “look back fondly” spin on the situation.

I hope that, like me, everyone who participated in these experiences will look back on them with a sense of positive nostalgia. After all, spending time, energy, and resources on experiences like these—unlike material possessions—tend to get better over time.

The Science of Why Experiences Satisfy

There is a massive body of work in the field of behavioral psychology that suggests the “hedonic superiority” of experiential over material purchases. Put simply, the science proves that engaging in more experiences rather than acquiring more things makes us happier.

One thread of this research focuses on the fact that experiences, as opposed to possessions, improve with time. Rarely do you hear anyone express “buyer’s remorse” about time spent engaging in a favorite activity or trying something new.

In an academic paper titled “Experientialism, Materialism, and Happiness,” professor Leaf Van Boven of the University of Colorado summarized the research and in doing so recalled a Rocky Mountain hike that turned into a near disaster. According to Van Boven, “A beautifully sunny June day turned stormy—first rain, then thunder and lightning, followed by a blanket of snow—and we were nearly lost in the wilderness.” Despite this harrowing experience, Van Boven wrote, “Nevertheless, I have a very favorable retrospective evaluation of this trip. It was a highlight of that summer. I am glad I did it.”

He went on to explain:

“Experiences are often like this. They often give us pleasure in retrospect—in the memories we revisit and in the stories we tell—even when they were unpleasant at the time. As one forgets the incidental annoyances and distractions that detract from the momentary enjoyment of an experience, one memory of an experience can be sharpened, leveled, and ‘spun’ so that the experience seems better in retrospect than it actually was.”

In short, while we quickly adapt to new material possessions and they lose their “shine,” experiences get better with time.

Four Ways to get More from an Experience

While the science is compelling and interesting, most of us don’t need some academic telling us why engaging in new experiences is so beneficial. We just need to listen to our own instincts and intuition. The most lasting and positive memories don’t come from acquiring something new, they come from doing something new.

However, not all experiences are created equal. Some stand out. In our experience, the best, most memorable experiences share some common characteristics.

Happiness. Contentment. Balance. These are all qualities that we aspire to. Often we overcomplicate how to achieve them. They’re not beyond reach. They can’t be bought. They’re not in someone else’s hands. They don’t exist in some distant, uncertain future.

Often, they’re waiting for us right outside the front door.