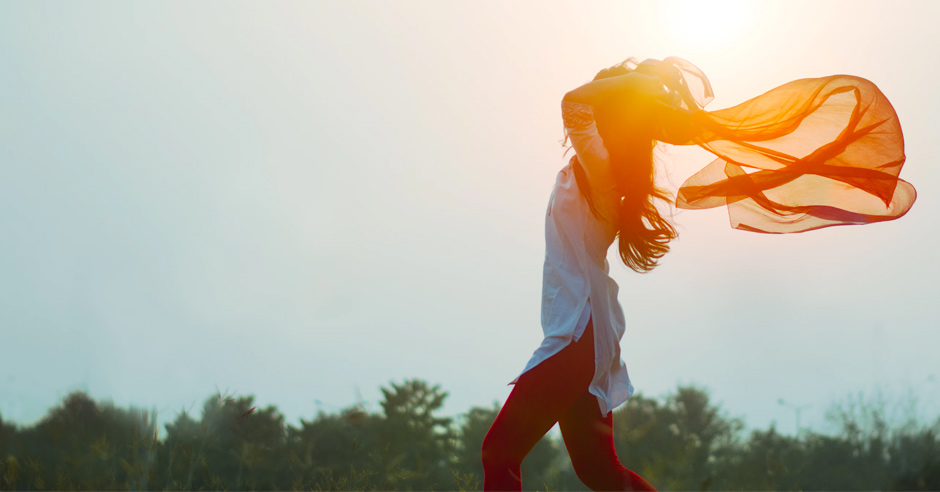 Each one of us bears scars from the wounds of our past. There isn’t a person alive who has not felt the sting of hurt, heartache, grief, and suffering. Each hard thing we go through leaves its mark, and the deeper the hurt, the longer it takes to heal. But, just as the ownership of too many physical possessions creates chaotic stress and clutter—long-term accumulation of rampant, undealt-with emotions can take over and become deeply detrimental to our well-being.

None of our minimizing journeys look quite the same, including what is inside the suitcases that hold our emotional baggage. It is one thing to peel back the layers of physical possessions in search of excess but digging into and disturbing long-buried emotions presents a different kind of challenge.

It is much easier to try to convince ourselves they don’t exist than to shine the light of truth into all those darkened corners, exposing them and coming face to face with how they are affecting us.

Our lives were meant for more than to be trudged through laden with the residue of yesterday’s overflow. This is a new day—the perfect time to courageously start confronting the “junk” weighing down those suitcases and assessing whether it earns the right to remain a part of our lives. The longer we wait, the more baggage we accumulate and the more cumbersome the load becomes. The only way to move forward is to leave the past where it happened, unpack, and let go of what’s inside. So, go ahead—unlock your suitcase, and lift the lid.

What do you see? Much of life’s emotional baggage stems from childhood events, so chances are it has been in there for so long and become such a part of you that you have forgotten it is even there. Here are three things you may come across in your soul-searching—

Are you unable to forgive someone who has wronged you? What they did to you may be incomprehensible. They may or may not have apologized or admitted to their own guilt and wrongdoing. It’s true that you are 100% justified in feeling the way you do because your feelings are real, and they deserve validation, but friend! Carrying this is making your suitcase heavy and hard to manage. Imagine how much lighter it would be if you decided to forgive, bury that hatchet once and for all, and lighten your load! A grudge is a prison cell, and forgiveness is the key. Remember, the one you can’t forgive is not the one who is swallowing the poison.

Any shame for past mistakes and failures in your suitcase? Let me ask you this—can you do one thing to undo what you have done in the past? Is there a rewind button that will take you back to the point just before it happened? Guilt is like holding a grudge against yourself. Grace has been extended to each of us. Why is it so hard for us to pass along that grace to ourselves? Forgive yourself, take the lessons with you, and endeavor to make better choices moving forward.

Even though fear is listed as one of the eight things Psychologist, Robert Plutchik identified as being a primary human emotion, and fear, in and of itself, is a necessary, natural reaction to protect and warn of danger, it can evolve into something extremely unnatural and unhealthy. Fear can become a cruel taskmaster that overtakes, paralyzes, and drains our joy of living.

As I have been “unpacking” my emotional baggage, I have been digging deep to unearth root reasons and origins for what I am finding. It has occurred to me just how much of my life has been controlled by a sense of unnatural, overwhelming fear, and, with the help of my wise and deeply-appreciated husband and son, I think I am finally understanding where the seed of such overpowering fear was planted. My dear mom was one of the most fearful people I have ever known. She lived most of her 84 years under the overhanging shadow of extreme fear.

Until recently, I never really gave much thought to why Mom was so afraid and why she automatically assumed the absolute worst in every situation, but as I follow the trail of fear, it is becoming clearer. Of Mom’s eight siblings, there were seven brothers, but just one sister. When Mom was 17 and her only sister, Opal, was 15, Opal died. That severely traumatic event in Mom’s young life set a precedent for the remainder of her days on earth. Fast forward to when Mom was 33 and her first husband was killed in a car accident, leaving her a widow with four underage children. A few years later, Mom married Dad, and a year after that, I was born. Life growing up was lived with an underlying sense of dread that the bottom would fall out at any moment and the worst possible outcome was more than likely.

Each time someone was sick, Mom assumed they were going to die. Every time someone was late, Mom feared they had been killed. When things were good, there was a sense that it couldn’t last, so we should prepare ourselves for the worst. As absurd as it sounds, this was real life in our home. Mom’s fears literally governed our lives and were probably at the root of why we moved 47 times (true story ~ Dad and I counted them one day.)

Fear is a huge component of my emotional baggage but forcing myself to get to the bottom of the reason for that has been enormously helpful in figuring out how to stop this cycle and identify what is real and what is mere imagination and psychological intimidation.

What else are you finding in your suitcase? It is time to let go of all that drags you down and open your heart and mind to what life could be like lived forward-looking instead of looking back.

Hey, maybe soon you will no longer need that suitcase—at all.