I read a quote from Dave Grohl this week that stopped me dead in my tracks. Dave, talking about his fellow band mate Kurt Cobain, says:

“Through Kurt I saw the beauty of minimalism and the importance of music that’s stripped down.”

As someone who writes, reads and thinks an awful lot about minimalism, I always pay attention when the topic comes up. But even more than that, it made me think about how often we relegate minimalism to a conversation about our physical possessions when that is never what it was meant to be. 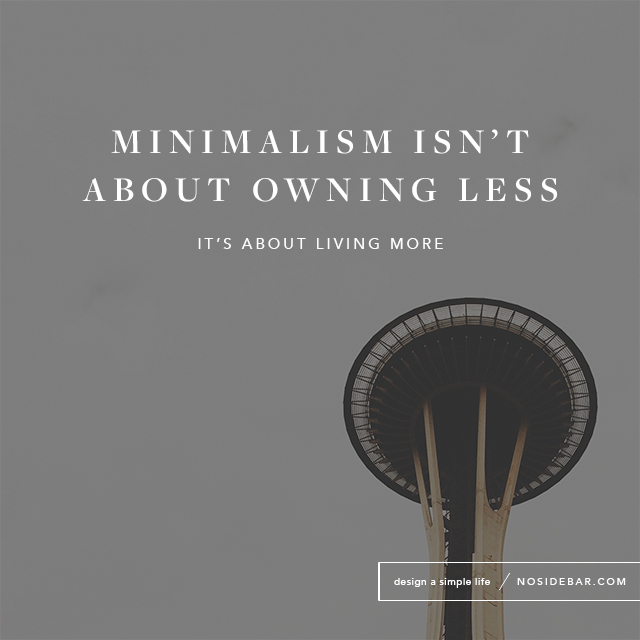 The benefits of minimalism extend so far beyond what we do or don’t buy when we go to the store. Even Kurt Cobain himself knew this.

If you don’t know much about Cobain, he is sometimes referred to as the Father of the Grunge movement, a sub genre of alternative rock that emerged out of Seattle. Cobain himself was known for his unkept appearance, his proclivity to leave his hair unwashed and also his profound ability to lead a movement with music that reflected the sentiments of an entire generation.

For Cobain, minimalism wasn’t just about owning fewer things — even though that might have been a reality for him. It was about the ability to express himself as he desired, without the frills and requirements deemed necessary by a larger society.

Apparently there were more than a few people who were interested in breaking out of the boxes of popular opinion and finding unique and “stripped down” ways to express themselves. Many were interested in ditching who society told them they needed to be and embracing who they already were.

So what can we learn from Cobain, and others like him, who have taken risks with their art, and with their lives, to break out of the mainstream and find ways to freely express themselves?

I would guess there are many things. But here are four that come to mind.

Most of us spend way too much time and energy in our lives trying to impress people. This is how our schedules end up so full and our budgets stretched so thin. We end up wishing we were living someone else’s life instead of our own.

All because we wanted other people to think we were charitable, or put-together, or well-off or whatever other impression we were trying to make.

What if we quit the commitments on our calendar that we never wanted to accept in the first place and started learning to say “no” more often? What if we stopped purchasing things we didn’t want, going places we didn’t want to be, wearing clothes we didn’t like, or even working a job we hated?

We might find a brand of happiness and contentment, without all the frills and extras, we never knew was possible. We might just find the happiness we have been looking for outside of us has been with us all along.

2. Recognize there are infinite options to any one decision.

No matter what culture or era we live in, it’s easy to assume there are only a few ways to do things. We only have a few options when it comes to career choice, clothing choice, where to live, how to act, even artistic expression.

Cobain lived his life, and his music, in contradiction to this principal. His lyrics were about avoiding the boxes culture wanted to put around him. In Nirvana’s song “Dumb” Cobain writes, “I’m not like them, but I can pretend / the day is done and I’m havin’ fun / I think I’m dumb / maybe just happy…”

Imagine what would have become of Cobain or his music without this perspective. And what would happen if we all avoided the pre-packaged lives culture dishes up to us saying, “these are your only options?”

What if minimalism isn’t just about living with less but about living without the assumption that we have to do things how those before us have done them? What if there is virtually no limit to our creative expression? How far could you go? What could you create? What kind of impact could you have?

3. Embrace even your strangest (or must unsettling) assets.

It’s no secret Cobain struggled with drug addiction in his lifetime, not to mention was known for his unkempt appearance. He certainly wasn’t the only one with these qualities in the grunge rock era, but still, I can see some who are reading this thinking: Is he really the best role model?

The truth is Cobain knew intrinsically what many of us often forget — even our most off-putting qualities, as a part of who we are, contribute to our incredible potential for impact.

As with many recovering drug addicts, Cobain understood fully the tension between who the world wanted him to be and what he knew to be authentic. He knew he had negative qualities and positive ones. In fact, drugs were possibly one way he found to escape from that brutal pull in two directions.

And yet his healing came as he chose to be fully and unapologetically himself. We could all do well to learn from Cobain in this area.

This is minimalism beyond a trip to Goodwill with some extra stuff. This is about doing an inventory on our better qualities — as well as our not-so-pretty ones — and embracing them as assets, if only because they are an important part of our powerful, totally unique self.

Since minimalism is easily explained as “living with less stuff” that can at times be misinterpreted as being content with exactly what you have, or settling for something outside of what you actually want. Cobain teaches us this is not what minimalism is actually about.

We can see from the life of Kurt Cobain that he was never content to settle for the status quo and that he never stopped expressing himself creatively or otherwise. He was always seeking to be better, to do better and to push harder.

Even in his short life, he made an impact because he was never willing to settle.

Although Cobain’s life came to a tragic end, his actions were at least in part a reflection of his unrelenting commitment to minimalism. He wasn’t willing to live to impress, to be who people needed him to be, or to settle for less, even if that’s what the world needed from him.

He was 100% committed to being himself.

Even as we remember him, both his life and his death, we can carry on a legacy he lived while he walked this earth — a minimalism not only of stuff, but also of spirit. A way of life where authentic expression and creative excellence were so important, he was willing to let go of everything else.