My phone is helping me become a better person. That might sound weird, but it’s true. We’re all people in progress. We’re all in the process of becoming the next version of ourselves. And yes, I’m suggesting that social media can help. 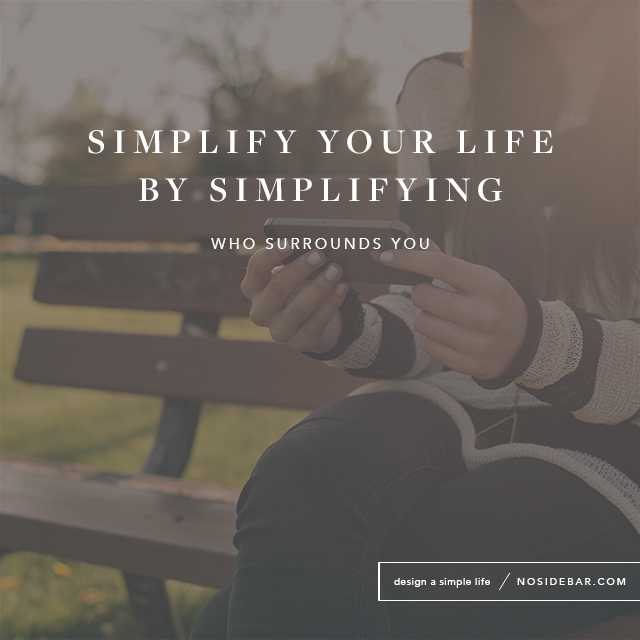 The only problem is, you might not know those people yet. When I want to start practicing new ways of doing things, I might know one or two people I can learn from, but not enough to make up a real community. That’s where the phone comes in.

Even though there are about a million ways social media can be a distraction, it’s still a really useful tool. When you want to make changes, following a small, specific group of people can actually make it easier to get started.

I know that sounds kind of calculated, but I don’t mean that you should start cutting people out of your social media circles left and right. Think of it as choosing to spend more time with a small group of close friends, and less time with a larger group of acquaintances.

Really, you’re going to spend some time on social media no matter what. Why not choose to follow people who help you become a kinder, or braver, or more intentional person?

— You can set up a feed reader (like Feedly or Bloglovin) to follow five blogs you want to learn from right now. Having them all in one place makes them feel more like a cohesive group.

— You can create a podcast channel in your favorite app for five shows that help you practice the changes you want to make.

Just consuming what those people are sharing won’t rock your world. You have to actually make the changes you want to see in your life. Try new ideas, practice new patterns, and share what you learn.

When you’re willing to do that work, you naturally become a little bit more like the people you’re paying most attention to, even if those people live halfway across the world and you only ever meet at odd hours in a little coffeeshop called “the Internet.”

Making changes helps you find your right people offline, too. You’ll start to recognize each other more easily. Even if finding in-person community takes awhile, you’ll have your online community to keep you afloat in the meantime.

You are always you, no matter what communities you decide to be part of. You’re enough, just as you are. And at the same time, growth and change are signs of life.

Who you are today isn’t exactly who you were five years ago. Five years from now, you’ll be another version of yourself. If it makes your life simpler, try using social media to nudge you in the right direction.