Early one morning in late 2014 I woke up in a panic with severe pain in my chest — I couldn’t breathe. 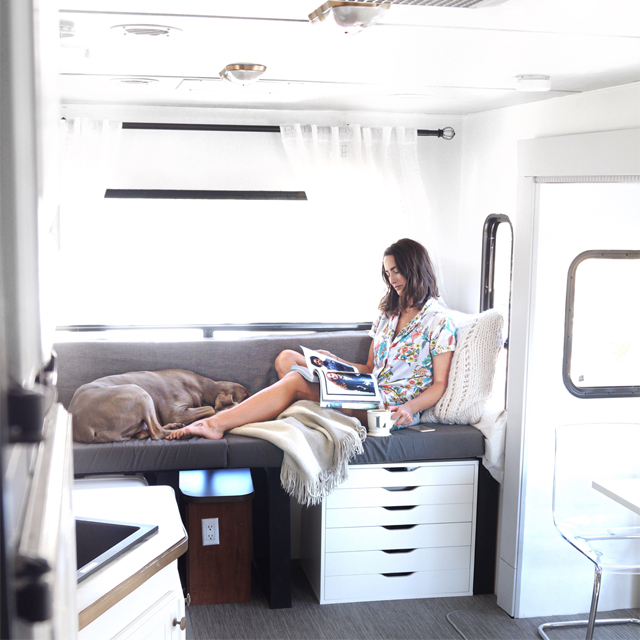 My boyfriend saw that I was clearly struggling for air and quickly called 911. On the way to the hospital all I could think about was my family, friends and how I was way too young to die.

The nurses poked and prodded, the doctors ran their test and when they returned the diagnosis was clear, “Young lady … you weren’t having a heart attack. But you did suffer a severe excessstuffomania attack. In layman’s terms: your excess stuff is suffocating you, causing you to go into a panic attack.”

Recommended treatment: Sell or discard 80-90% of what you own and move into something under 300 sq.ft.

Late in 2014, enough was enough. From all my years of moving, traveling and general indecisiveness, I found myself depressed and uninspired. Our apartment was filled with useless stuff, most of which I had thrown mindlessly in my basket during quick trips into Target to pick up “just one thing.”

Things big and small crept their way into my life when I wasn’t looking, until I couldn’t ignore it all any longer. They were holding me back, distracting me from all the things I really wanted to accomplish. My stuff was suffocating me, and I knew that something had to change.

Life in a Tiny House

It only took us a couple of days before we were sold on the idea. So later that Fall, we decided to downsize and sell everything we owned to move into 220 sq.ft on wheels. It was a pretty easy decision to make. The process was a bit daunting, but equally exciting.

After struggling for years to keep our heads above water in the tumultuous world of entrepreneurship and bouncing between apartments, it was our opportunity to really shake things up and make a big change. We ultimately decided on remodeling a travel trailer due to time and budget restraints.

The downsizing process took a solid 2-3 months of work. We listed the bigger ticket items on Craigslist and Instagram; essentially everything had to go.

We purged the closets, the kitchen, the living room, the bathroom. Basically, everything was up for grabs. The yard sale was a big success and we donated several car loads of stuff. Every time a sale was made I felt a tiny weight being lifted from my shoulders.

I sold clothes that still had original tags on them, broken electronics covered in dust and a Martha Stewart fondue pot kit that I had moved around with me since 2007. I know the date because the receipt was still taped to the box.

We got our first taste of the minimalistic life during our last month in the apartment; only a table, 2 chairs and a rug occupied our living room.

Even after we moved into our tiny home, we continued to purge. It was almost as if it had become second nature: addictive in a sense. For so long I believed all the material possessions in our life helped define us and that I needed to assign certain value or importance on certain possession.

The process of downsizing was completely magical and transformative.

My depression began to slowly melt away and my anxiety all but vanished. I stopped taking the prescriptions my doctor was writing to mask the symptoms. I instead found a cure and treated the problem. My relationships both with myself and the people around me had improved, and I was able to think more clearly. My motivation had returned, and I could breathe again.

We have become a society of consumers that have been tricked into believing that the more we have validates us and gives us power that makes us more important than we really are.

As the tiny house and minimalist movement continues to gain momentum and popularity, the tides are beginning to turn. The old sales and marketing gimmicks are not as effective as they used to be.

As mainstream media continues to expose corporate greed and the conditions of factories working literally dying to produce these products we consume to excess, we’re becoming more cautious.

It’s been a fun way of life so far, and I hope that it continues. I’ve definitely discovered a lot about myself along the way. Here are 5 things I’ve learned after downsizing and living tiny.

1. I stopped caring what people think about me.

As a blogger, it can be easy to be overly sensitive to what others think, but once I striped myself of all the material excessive it allowed me to tell a more authentic story. I won’t be everyone’s cup of tea and that’s OK.

2. I learned to be honest with myself.

Once you strip yourself of stuff, it forces you to get much more real with yourself and with others. I stopped lying to myself about how I thought my life should look and began living it how I wanted to live.

3. I appreciate and take care of the things I own.

In my old life everything was out of whack. I was working way too much, not taking care of myself and neglected my relationships. After moving into a tiny house, I’ve been able to focus on the few things we own.

4. Doing nothing is sometimes OK.

I used to be a “busy is better” person. I’ve learned that turning everything off and just hanging on the couch for an afternoon is OK — and this is something I no longer feel guilty about.

5. Things are replaceable, people/experiences are not.

This, by far, is the most important thing. Ever.