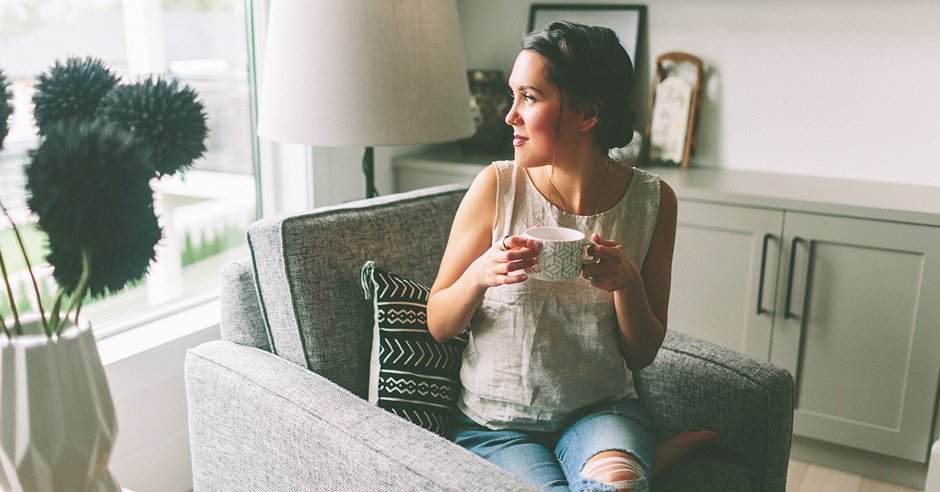 When I first came across minimalism, I was a law student. To be honest, I can’t recall having a “lightning bolt moment” or which blog it was that struck a chord with me, but I do remember gradually developing a sense of heaviness.

The more I read about minimalism, the more I felt weighted and crushed, as if the walls were pressing in from all sides. So I got on board—I decided to declutter some of the stuff that I thought was weighing me down.

I spent weeks going through the house where I had lived for the past five years, donating old jeans and forgotten sporting equipment.

I thinned out my collection of partially-read books and eliminated three of the four corkscrews in my kitchen drawers. I got rid of the dust collecting fake plants, the panini press, and the half-dead vacuum in the closet. My space felt cleaner, looked better, and was ten times more functional, but still, I felt the heaviness.

What was the special ingredient that was allowing the minimalist bloggers that I admired to live simply, effortlessly, and enjoyably?

My lightning bolt moment was not when I learned about how minimalism can help you reduce your clutter. Mine was when I realized why living with less was worthwhile in the first place—to create space for what is important.

It dawned on me that the reason I felt heavy is because I wasn’t applying minimalism to my life. My house was organized and breezy, but my mind was weighed down by my everyday activities—spending hours per day furthering myself along a career path that I wasn’t passionate about.

This realization sent me, an achievement-oriented planner, into a bit of a tailspin. I had been working toward this goal for years—spending long nights in the law library, studying for grueling finals for months, working my way to the top of the class, taking unpaid internships to gain experience—and I was about to graduate.

How in the world could I turn around and throw that all away? What would people think? How could I just jump off the track and start over at this point in my life?

How Minimalism Taught Me to Live Fearlessly

Turns out, minimalism showed me that the only thing scarier than starting over is staying in a place where you don’t belong. Here are a few minimalist principles that helped me realize that living with less helps you make room for a lot more:

1. Your short-term actions must align with your long-term values.

This is straight from the mouths of The Minimalists. I can’t think of a better way to explain the subtle background hum of dissatisfaction that often permeates our modern lives. If your everyday actions are not in furtherance of your long-term goals and values, there is a mismatch that grinds against our sense of security, our belief in ourselves, and our general happiness.

I wanted to do something with my life that I felt was fundamentally important. I wanted to connect to the past and link to the future, to inspire, and to create. The law is a wonderful profession, but my everyday actions as an attorney didn’t match up with my long-term goals and aspirations.

There was always a nagging sense of “wrongness” that led to pervasive unhappiness. This changed when I started with the end in mind first, and considered what I truly valued before making any immediate career decisions.

Often, the answer to our problems is simple. The difficult part is implementing the answer and accepting the consequences of those decisions.

I had a clear and defined passion—I had spent the previous fifteen years studying, practicing, enjoying, and engaging in music. I lived in the band room in high school, majored in music in college, played in a community ensemble, and spent my summers in law school teaching at band camps across the state. My decision to leave the law and become a band director was so simple, it was almost painfully obvious. But it was not easy.

Changing my career cost me in many ways—time, friendships, money, missed opportunities—and my path back to the classroom was humbling. I had a doctorate and I went back to school to take undergraduate courses I hadn’t taken in college [which turned out to be a very enriching and enlightening experience].

Minimalism taught me that the simplest decision is often the right decision, even if it means that the road ahead will be paved with challenges. The challenges are worthwhile, and help us grow immensely.

Many of my favorite minimalist bloggers have taken alternative paths in life. Moving to a foreign country, building a tiny house, living nomadically, or owning less than 100 items are choices that diverge from the mainstream.

I often wondered how they could live so fearlessly, without regard to the judgement of society. Ironically, minimalism taught me to embrace a profound concept that has an incredibly mainstream following—YOLO, or “you only live once.”

Minimalism forced me to confront my own values. I realized that nobody was making my choices for me, and it was my own shallow priorities that were making me miserable. I stopped placing value on things like external appearances or perceived prestige, and decided to focus instead on living a meaningful life.

When you truly consider that you only live once, realigning your priorities to focus on the meaningful and the important is a simple decision.

Today, I am not without disappointment, or fear, or struggle. These things are part of life. Minimalism has simply changed my reaction to these setbacks—what I used to ignore, I now examine and consider.

The difference is that these challenges occur within the framework of my long-term values—what is a setback today is in pursuit of my mission in life, and that is a much easier pill to swallow. As I get older and my life changes, new layers emerge.

While changing careers was the best decision I ever made, I now don’t regret putting it on hold to stay at home with my kids while they’re little.

Minimalism has truly changed the way I map the course of my life—intentionally, meaningfully, and without fear.