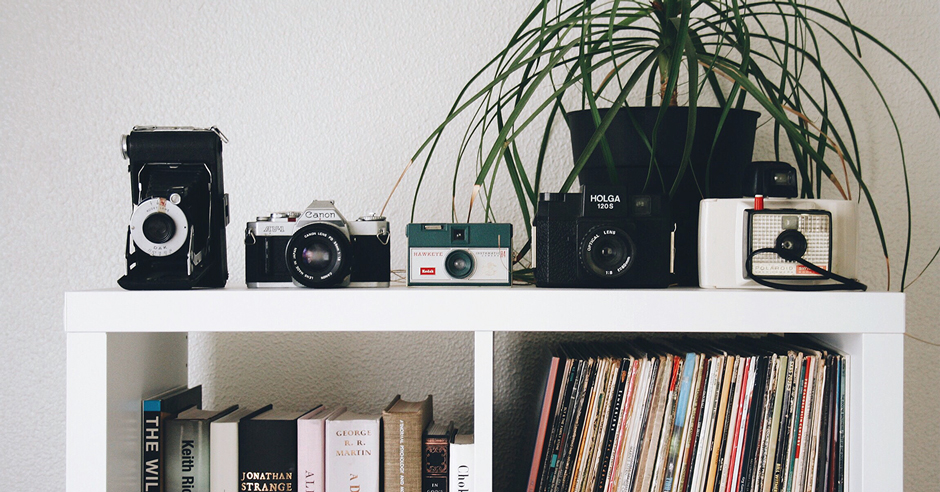 I consider myself a minimalist, but as I sit in the closet floor choosing which things to part with and filling up another box to donate, I can’t help feeling like I’m still missing the bigger picture.

I don’t have many possessions these days, but my relationship with stuff isn’t exactly working. I’ve trained myself to evaluate each possession in relationship to my ideals, and held against my beliefs of love, joy, freedom, and peace, no item I own seems to matter much. It keeps my house neat and my time free, but the same line of thinking that inspires me to let go of so many objects also shrinks the joy in the things I decide to keep.

Finding joy in material things certainly isn’t necessary for having a joyful life, and given the choice between the extremes of suffocation by stuff and starvation of material joy, I’d choose starvation. But isn’t there a better way?

Engagement with the material world is unavoidable, and measuring its worth according to my needs feels cold and self-centered.

Can’t I find a better method to navigate the material world, one that allows me to derive joy without threatening to fill up my spaces with stuff?

Here on the floor, sifting through my things, it’s clear that I am not only choosing which things to own, but that I am also choosing ownership. If we’re looking for peace, perhaps it’s not our possessions, but our perceptions that require curating. So I decided to pause in asking which things don’t serve me, and start examining the nature of ownership in itself.

At its most fundamental, ownership is defined as a right to possess. It’s a concept that extends far beyond our closets. All of existence is divvied up by various imaginary boundaries that classify, categorize, and separate every square inch of land, every object, animal, and person. Everything and everyone exists in relationship to whatever has dominion over it.

Our unquestioning acceptance of ownership sets the stage to be overwhelmed by what we own and discontent with what we don’t. Ownership is a human creation. It’s a tool of social order, but we apply it to our own lives as a truth. We try to bend our hearts and our stuff to operate around it.

Realizing the concept of ownership, the same concept I apply to the stuff I keep in my own closet, is part of the conceptual framework for crime, war, and slavery makes me want to rethink the way I approach ownership in my own life.

Breaking the Spell of Stuff

I hoped there was a better way, so I decided to redefine my interaction with the material world, and I replaced ownership with these three kinder beliefs that promote joy instead of suffocating or starve it.

1. Find respect for objects in themselves.

When I began to question the concept of ownership, I found myself with more respect for everyday objects, not unlike the respect I give to ancient artifacts or famous works of art.

Every item, even something I would call ugly or cheap or outdated, is built from the basic materials in nature that I easily find awe-inspiring and beautiful. That 1970’s couch in the basement might not match my decor, but I have respect for the ground that grew the tree to make the wood for its frame, the cotton that bristled against the wind before being woven into its fabric, and the humans who sketched and re-sketched its lines and chose the exactly perfect shade of yellow for its color.

I began to respect that each object has an identity and a presence. Each thing was designed and created with intention. Each item in my closet exists in its own right. Its worth is unaffected by whether I drop it at Goodwill or keep it forever.

My new respect for the material world shifted my view of objects from possessions to companions, and I’m finding a sense of peace and adventure where I previously saw only burden. Discarding the concept of ownership means that objects are free to come and go naturally.

Before making a purchase, I used to consider if the thing was worthy of the space and money it would cost. It worked, but it felt miserly and judgmental. The process was full of skepticism and devoid of joy.

Instead, now I ask if I can provide a proper place for that object to rest, not so unlike taking in a new pet. Is there a place for this thing in my life? Can I be trusted with the stewardship of this object?

When my appreciation for an object has diminished or its place in my life has changed, it’s that same respect that requires me to send it on its journey to a new home. It doesn’t make sense to stack unused and unloved objects in my closet, no more sense than it makes to imprison my friends in my house indefinitely just in case I feel like hanging out with them someday.

If we appreciate things in themselves and have proper respect for them, we don’t need control over them to recognize their value or beauty. Shifting away from ownership to something more meaningful and kind leads me to a true appreciation that doesn’t inspire possession, but supersedes it.

For a while, I diminished the value of the material world to avoid owning too much stuff. And it worked- sort of. But why not instead, since we have the choice, build stuff up instead of tear it down and see beauty and wonder in everything? Why not cultivate the respect for the world that we should have had all along? And as we temper our egos, let minimalism appear as a natural result?